The Bat and the Squid

As anyone with even the merest hint of interest in astronomy knows, our galaxy and the many others in the universe contain nebulae. A lot of them in fact. But these ones are part of a very select group, perhaps populated by no others, for they are actually two nebulae in one! No doubt you can see the nice puffy red/pink gas cloud here (called the Flying Bat Nebula) but you might also notice the smaller light blue shape inside it (known as the Squid Nebula) which is actually a separate nebula.

The Flying Bat is a fairly standard emission nebula but there is still some confusion as to what the Squid Nebula actually is. It was only discovered a few years ago and was initially thought to be a planetary nebula but is now believed to be a bipolar outflow from the bright blue star at its centre (HR 8119). One thing that seems very likely, however, is that it's actually within the Flying Bat rather than in front of it.

Observation: This unusual pairing can be found some 2,300 light years away in the constellation of Cepheus and, while large, is also rather faint. Actually, the Flying Bat isn't too hard to see - it can be made out with a mere pair of binoculars - but you'll need some pretty decent equipment to image the Squid (at least 200mm lens) which is extremely faint. Many think it worth the effort though! 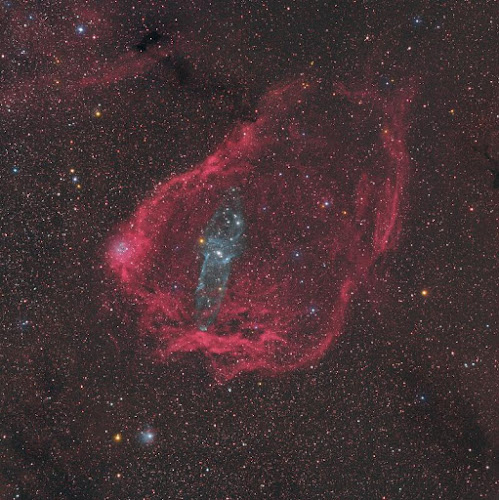 Email ThisBlogThis!Share to TwitterShare to FacebookShare to Pinterest
Labels: Nebulae