Like all the giant planets Uranus has about a billion moons, but few of them are much more than irregularly-shaped asteroids or Kuiper Belt objects captured by the green planet's powerful gravitational field. One of the more substantial examples, though by far the smallest of the five that are sufficiently large to have been rounded by their own gravity, is Miranda, but it's definitely the most interesting.

Discovered by Gerard Kuiper and named by him after the character in Shakespeare's 'The Tempest', Miranda is only 480km in diameter and is the least dense of Uranus's rounded moons. This suggests a significant portion of it is made up of water ice, but far more notable is the incredibly chaotic nature of its terrain which makes it look as though it's been constructed from the spare parts of various other broken moons! All over the moon there are large sections which bear little resemblance to the sections immediately adjacent to them, but what could cause such strange terrain?

One obvious possibility is geological activity, although it would have to be on a scale not previously seen, but an even more dramatic theory is that the entire moon was shattered into several large segments as a result of a colossal impact, with the fragments coalescing over time but in a different arrangement to before. Whatever caused it, Miranda is definitely among the most unique moons in the Solar System as far as its appearance is concerned, and one with a very violent past as well. 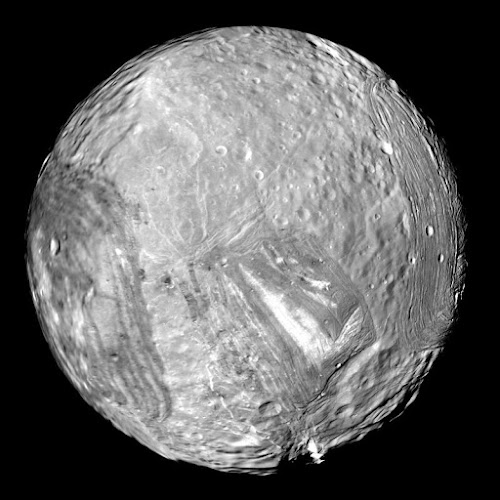 Email ThisBlogThis!Share to TwitterShare to FacebookShare to Pinterest
Labels: Moons